In January 1883 Syed Ahmad Khan delivered a speech in Patna, emphasizing the need ‎for cordial relations between Hindus and Muslims. Excerpts from this speech follow.‎ ‎

Friends, in India there live two prominent nations which are distinguished by the ‎names of Hindus and Mussulmans. Just as a man has some principal organs, similarly these ‎two nations are like the principal limbs of India. To be a Hindu or a Muslim is a matter of ‎internal faith which has nothing to do with mutual relationship and external conditions. How ‎good is the saying, whoever may be its author, that a human being is composed of two ‎elements—his faith which he owes to God and his moral sympathy which he owes to his ‎fellow-being. Hence leave God’s share to God and concern yourself with the share that is ‎yours. ‎ Gentlemen, just as many reputed people professing Hindu faith came to this country, ‎so we also came here. The Hindus forgot the country from which they had come; they could ‎not remember their migration from one land to another and came to consider India as their ‎homeland, believing that their country lies between the Himalayas and the Vindhiyachal.t ‎Hundreds of years have lapsed since we, in our turn, left the lands of our origin. We ‎remember neither the climate nor the natural beauty of those lands, neither the freshness of ‎the harvests nor the deliciousness of the fruits, nor even do we remember the blessings of the ‎holy deserts. We also came to consider India as our homeland and we settled down here like ‎the earlier immigrants. Thus India is the home of both of us. We both breathe the air of India ‎and take the water of the holy Ganges and the Jamuna. We both consume the products of the ‎Indian soil. We are living and dying together. By living so long in India, the blood of both ‎have changed. The colour of both have become similar. The faces of both, having changed, ‎have become similar. The Muslims have acquired hundreds of customs from the Hindus and ‎the Hindus have also learned hundreds of things from the Mussulmans. We mixed with each ‎other so much that we produced a new language—Urdu, which was neither our language nor ‎theirs. Thus if we ignore that aspect of ours which we owe to God, both of us, on the basis of ‎being common inhabitants of India, actually constitute one nation; and the progress of this ‎country and that of both of us is possible through mutual cooperation, sympathy and love.

We ‎shall only destroy ourselves by mutual disunity and animosity and ill-will to each other. It is ‎pitiable to see those who do not understand this point and create feeling of disunity among ‎these two nations and fail to see that they themselves will be the victims of such a situation, ‎and inflict injury to themselves. My friends, I have repeatedly said and say it again that India ‎is like a bride which has got two beautiful and lustrous eyes—Hindus and Mussulmans. If ‎they quarrel against each other that beautiful bride will become ugly and if one destroys the ‎other, she will lose one eye. Therefore, people of Hindustan you have now the right to make ‎this bride either squint eyed or one eyed. ‎ Undoubtedly, what to say of Hindus and Mussulmans, a quarrel among human beings ‎is a natural phenomenon. Within the ranks of the Hindus or Mussulmans themselves, or even ‎between brothers as also between fathers and sons, mothers and daughters there are ‎dissensions. But to make it perennial is a symptom of decay of the family, the country, and of ‎the nation. How blessed are those who repent, and step forward to untie the knot which has ‎by chance, marred their mutual relations and do not allow it to get disrupted. 0! God, let the ‎people of India change to this way of thinking.‎ 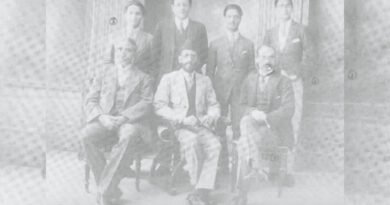