Mulla Abdul Qayyum Khan was born in Madras in 1853. He was one of the pioneers who awakened the people to fight against the British and the Nizam knowing pretty well that it meant facing the ire of the mighty powers.

His parents settled in Hyderabad in his childhood. After learning Persian and Urdu in Dar-ul-Uloom he completed higher education in Mirzapur, Uttar Pradesh. He joined service in the princely state of Hyderabad as an employee and soon rose to a higher position.

He met Aghoranath Chattopadhyaya, father of famous poetess Sarojini Naidu, in 1880. The friendship that developed between them stood as the symbol of Hindu–Muslim unity and lead to several historical events in Hyderabad State. Abdul Qayyum was interested in public service right from his childhood.

He gave priority to spreading education and enlightenment and established various institutions and organizations for the same. Abdul Qayyum Khan took active part in “Anti-Chanda Railway Project Agitation” along with Dr. Aghoranath and with this, he created an awareness among the common people that they could disobey the orders of the Nizam, if they are not in the welfare of people at large. For this reason, he faced the ire of Nizam and was banished from Hyderabad state for some time.

He created history as the first Muslim leader from Hyderabad state to join the Indian National Congress in 1885. He wrote essays in a newspaper called ‘Safire-e-deccan’ to counter the anti congress campaign led by Sir Syed Ahmed Khan. He published a pamphlet in 1905 to silence his critics. He gave a call not only to Muslims but also to all the people to ignore the orders of Nizam and to join Indian National Congress. He played a prominent role in the agitation against the division of Bengal in 1905 and imparted velocity and vigour to the Swadeshi Movement.

For his work of promoting communal harmony, he won laurels of the people not only as a ‘Prophet of Hindu-Muslim unity’ but also as an ‘Embodiment of Hindu-Muslim unity.’ His egalitarian ideas, patriotic fervour, ideals of universal brotherhood impressed Sarojini Naidu to describe him as ‘a great Muslim, a great Indian and a great human being’. Such a great patriot Mulla Abdul Qayyum Khan breathed his last on 27 October, 1906. 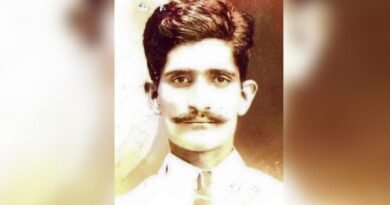