My London-based friend Shamsuddin Agha has sent me a video. In the viral video retired IPS officer Amitabh Kumar Das is seen protesting the proposed demolition of a portion of the historic Khuda Bakhsh Oriental Public Library’s (KBL) heritage building in Patna. This is to facilitate the construction of a flyover. Das plans to petition the Patna High Court too to stop the attempt to erase part of our intellectual heritage. Several newspapers, radio and Television channels have carried people’s angst against this proposed demolition. A senior journalist-colleague in Patna tells me the government is adamant on building the flyover on that patch of the Ashok Rajpath in Patna and many institutions, including parts of Patna Medical College, Government Urdu Library and Khuda Bakhsh Library’s Curzon Reading Room, will be under axe.

Like Das, there are countless book lovers, academics and scholars who are beneficiaries of the iconic KBL. Situated in the vicinity of the mighty Ganga, the KBL has witnessed Lords and their ladies in imperial India, rajas and nawabs, freedom fighters, including Mahatma Gandhi, poets and patriots pass through its portals. It is the fruit of an ardent bibliophile and book collector Khan Bahadur Khuda Bakhsh’s tiring efforts. He opened the library in 1891, not for himself alone but for the public which is also why it is called a public library, with 4000 manuscripts. Out of these,1400 he had inherited from his father Maulvi Mohammed Baksh. Over the years, his family members and other book lovers kept adding to the treasure. Today it has over 250,000 books and 21000 manuscripts in Arabic, Persian, Pashto, Turkish, Mughal miniatures, paintings of the Mughal, Sikh and Rajput rulers, rare copies of the classics like Firdausi’s Shahnameh. Simply a treasure-trove created over two centuries. KBL’s director Shaista Bedar, in reply to the demand for NOC from the government before it moves its bulldozers to pull down part of the Curzon Reading Room on the premises, has suggested many alternatives. One of them is: a road from Kargil Chowk passing through Bankipore Club and back of Anta Ghar along the bank of the Ganga. This makes sense. Make a detour, don’t disfigure this priceless piece of history.

Daughter of former director of KBL, Dr Abid Reza Bedar, Dr Shaista virtually grew in the library’s lap. Her father Dr Bedar helmed the library from 1972 to the mid-1990s and Dr Shaista lived on the library premises—the director’s residence is also there–from 1972 to 1993 before she went to Aligarh for higher studies. She has been KBL’s director since 2019. “I don’t just do a job here. The library has been part of my existence. Mere wajood ka hissa hai,” Dr Shaista tells me. To an extent I too owe my existence to this library. For close to five years in the late 1980s and early 1990s, it was almost like a second home to me. Since it was an era when university education in Bihar had gone to the dogs—I doubt if it has improved since—agitations, bundhs and strikes were order of the day in colleges. Since the classes hardly happened, we took refuge in the libraries. Those of us who saw education the only passport to progress since we neither possessed huge parcels of land nor our daddies were politicians became members of KBL Every day I would paddle my rickety bicycle to reach the gate of the library. Sometimes we would reach earlier than the peon opened its arched door. As you entered it, the rare artifacts, manuscripts and hand-written letters and firmans transported you to times gone by. Nostalgia overpowered you even as you tried to return to the present chaotic, cruel times. If an attempt to destroy a part of our heritage is not cruelty, I don’t know what is.

Its high-ceilinged main hall is decked up with literary periodicals neatly stacked on the shelves while books peep out from inside the glass-paneled almirahs. Research scholars from India and abroad, local candidates preparing for the Civil Services Exams, retired government officers and Professors pore over the books. Silence is something being maintained here voluntarily; it hardly needs to be enforced at this sanctuary where the only audible sound is occasional rattles of the pages. Everyone talks here in whispers. It is this oasis, this island of peace and tranquility that sustained and immensely benefited us. The likes of Khushwant Singh, M J Akbar, Salman Rushdie, Milan Kundera, Sir Vidya Naipaul and Neruda gave us company here. So did historians Romilla Thapar, R S Sharma, A L Basham, B N Pandey, Hasan Askari, D N Jha, Suneeti Kumar Chatterjee, Bipin Chandra, Mushirul Hasan and many more. Those who were looking for the gems of medieval history, there was a lot to chew on. You could meet Babur in Baburnama, Akbar in Aina-e-Akbari, Jahangir in Tuzk-i-Jahangiri and Bahadur Shah Zafar in many of his melancholic ghazals, including this one: ‘Kitna hai bad-nasib ‘Zafar’ dafn ke liye/do gaz zamin bhi na mili ku-e-yar mein (How unfortunate you are Zafar, you didn’t get a place for grave in your homeland).’ Zafar penned these lines in prison after the British dethroned him, exiling him to Burma in the aftermath of the failed 1857 rebellion. You met many such melancholic as well as happy characters from history at KBL. 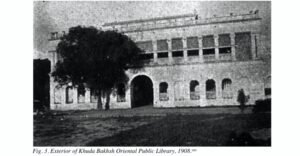 But KBL is not just a library. Dr Abid Reza Bedar had turned it into an intellectual nerve centre, a platform to debate and discuss history, politics, society, archaeology, shairi, almost everything that has helped shape our cultural, intellectual life. Secular to the core, Dr Bedar invited scholars and academics, journalists and opinion makers, commentators and columnists to engage with ideas and thoughts. So, one day it was B N Pandey speaking on Aurangzeb while the other day it was Sahitya Akademi awardee poet Kaleem Ajiz reciting the couplets that described the enormous pain this world had inflicted on his psyche: ‘Woh jo shayeri ka sabab hua woh mamla bhi ajab hua/ mai ghazal sunau hun is liye zamana usay bhula na de (The reason I began writing poetry is strange/I say ghazals so that the world will not forget them).’ The seminars, workshops, elocution and essay competitions and poetry recitation sessions Dr Bedar held at KBL provided fuel to the minds in an atmosphere which was redolent with communalisation and criminalisation of politics and politicisation of crime. The library kept us informed, engaged and entertained too.

On the same premises sits Curzon Reading Room inaugurated in 1905. Nitish Kumar government’s development plan of Patna wants to mow down this Reading Room. This is a spacious, high–ceilinged hall with dozens of newspapers on wooden tables inviting readers, mostly students preparing for different competitive exams. Since entry into the reading room is free, readers flock to it to devour news and views. “By demolishing a portion of it, they will be ruining the beauty and heritage of the library apart from depriving us of a spacious reading room,” says Dr Shaista.

A source says that it is being done to fill the pockets of some corrupt contractors and engineers. Instead of endowing institutions of national and international importance like KBL, the Nitish Kumar government is hellbent on destroying them.

Is scholarship in the land of peers, saints, pundits, scholars and educationists no longer valued? Are places of heritage in new India to be bartered away and ruined because some officers mistakenly believe they can get away with any nonsense? I leave you with these questions. They should haunt you and give you sleepless nights as they do to me. Tipu Sultan’s swords and ring in two Museums in London:

SURAJ – KUND : One of ancient reservoir of the World