The Islamic world was far ahead of the Europian West in medicine. Until 1600 the chief medical textbook in Europe was the Canon of Medicine of Avicenna, an eleventh-century Persian scientist and philosopher whose homeland had become part of the rapidly expanding Islamic Empire. Arabs established colleges of translation in Spain and Sicily which made the wealth of knowledge in Greek, Syriac, sian and Sanskrit writings, available in Arabic. They were in turn translated into Latin. Great halls of science with libraries and astronomical laboratories were created alongside the translation colleges to promote research. Spain and Sicily thus became two major centres for intellectual and scientific exchange between East and West. Cordoba was the centre of learning in Europe. Lane –Poole the British Poet wrote in the 13 th. century:

One such greatest physicians of Moorish Spain named Al Zahrawi or Albucasis, was born in the city ofMadinat- Al-Zehra, 8 kilometers northwest of Cordoba, Andalusia.

His full name was Abū al-Qāsim Khalaf ibn al-‘Abbās al-Zahrāwī (936–1013), popularly known as Al- Zahrawi, he was a descendant of a migarated Ansari Family of Arabia.

He was a prominent Arab-Andalusian physician, surgeon and chemist of the Middle Ages. He has been described as the father of surgery. He was the court physician of the Andalusian caliph ʿAbd al-Raḥmān III al-Nāṣir and his principal work is the Kitab al-Tasrif, a thirty-volume encyclopedia of medical practices. The surgery chapter of this work was later translated into Latin, attaining popularity and becoming the standard textbook in Europe for the next five hundred years. He pioneered the use of catgut for internal stitches and his surgical instruments are still used today. The majority of the knives in Al-Tasrif have special names such as Mesbar, Maghdah, and Meshel. He invented special knives dependent on the type of surgery and the incision needed, and adapted the shape of each knife to its use, observation and his personal experience. He is credited with Surgery of the eye, ear, and throat. He fully described tonsillectomy and tracheostomy.

He devised instruments for internal examination of the ear. He devised an instrument used to remove or insert objects into the throat. He described how to use a hook to remove a polyp from the nose. He described the exposure and division of the temporal artery to relieve certain types of headaches. He utilized cauterization, usually to treat skin tumors or open abscesses. He applied cauterization procedure to as many as 50 different operations.

Application of ligature for bleeding vessels and internal stitching utilizing catgut. He preceded the famous French military surgeon Ambroise Pare (1510–1590), claimed to be the first European to utilize sutures, by five centuries.

Removal of urinary bladder calculi. He advised that the treating physician has to insert a finger into the rectum of the patient, move the stone down to the neck of the bladder, then make an incision in the rectal wall or the perineum and remove the stone.

He devised instruments for inspection of the urethra. He is credited to be the first to describe ectopic pregnancy. He devised several dental devices and artificial teeth made of animal bones.

In pharmacy and pharmacology, Al-Zahrawi pioneered the preparation of medicines by sublimation and distillation. He dedicated the a chapter of his book to pharmacy and pharmaceutical techniques. The chapter was later translated into Latin under the title of Liber Servitoris, where it served as an important source for European herbalists.

Al-Zahrawi also touched upon the subject of cosmetics and dedicated a chapter for it in his book and called it. “Medicine of Beauty” (Adwiyat al-Zinah) 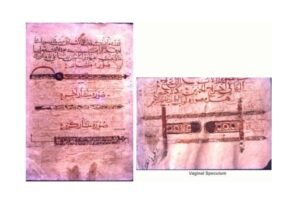 All his instrument is still displayed at Museo Vivo de al-Andalus.you can assume his legacy that street in Cordova where he lived is named in his honor as “Calle Albucasis”. On this street he lived in house no. 6, which is preserved today by the Spanish Tourist Board with a bronze plaque (awarded in January 1977) which reads: “This was the house where Al-Zahrawi lived.”